Anderson likes to keep her personal life private hence has not yet disclosed the year and month she was born. However, she might be in her 40’s.

Anderson has managed to keep her personal life away from the limelight hence she has not disclosed any information about her parents. It is also not known if Anderson has any siblings.

Anderson is married to Arie Solomon. The couple married in 2015, they have two children; She named her son Daniel, after Daniel Craig, her favorite James Bond, who she said behaves like a Shepherd from Australia. She has two dogs, which she rescued from overcrowded Los Angeles animal shelters.

Anderson has an estimated net worth of about $1 Million – $5 Million which she has earned through her career as a journalist. 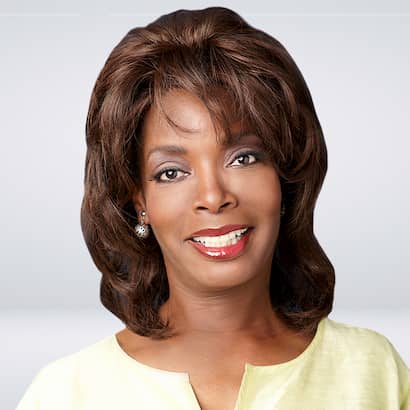 The table below answers some of the frequently asked questions about Anderson.

Gayle started her career as an intern at New York’s ABC Radio News and WABC-TV, worked her way up to a producer in the industry. She has won 16 Emmy Awards. For her work on the KTLA Morning News, Gayle most recently won an Emmy in 2014. Her hosting of special reports from KTLA’s Heal the Bay won Gayle an Emmy in 2011. Her work on the pre-show of KTLA ‘s Tournament of Roses Parade won Gayle another Emmy in 2010, as well as her 2009 reporting on the tragic death of Michael Jackson.Prior to KTLA, Gayle was Tribune Entertainment’s correspondent and producer of’ Now It Can Be Told,’ an investigative news program. Gayle had been KPRC-TV ‘s “Troubleshooter” reporter and “Nearly Noon” anchor in Houston until “Now.” She served as a reporter and weekend anchor at WCIX-TV in Miami from 1984 to 1986. She has also consulted for a variety of major radio networks, including New York’s ABC and NBC, and the National Black Network. At KTNH-TV and radio stations WDRC-AM, WKND-AM, and WWCO-AM, she held reporter and anchor positions in Connecticut.

Anderson is currently working at  KTLA where she works alongside other famous  KTLA anchors and reporters including;

For her work on the KTLA public relations show “Making It,” Gayle has won other Emmy Awards including two in 1994 for best live coverage for her reporting of the Northridge earthquake. For her reporting of the Malibu Fires, she was awarded her first Emmy Award in 1993 for best live coverage. In 2001, she won the Golden Mike Award from the Radio & Television News Association of Southern California as the best reporter.In 1990, Gayle won the Houston Leadership Association’s “Hero of the Year Award”; the 1988 “Presidential Consumer Relations Award”; the 1987 “Young Black Achievers Award”; and the Best Spot News Reporting Award for Radio-Television and News Directors. Anderson received an APTRA Award in January 2002 as the best anchor for “best live coverage of a news event,” and was chosen to carry the Olympic torch through Southern California for the 2002 Winter Olympics torch relay that same month.

L.A. City Hall lit up in the colors of the Armenian flag 🇦🇲 as the country’s conflict with Azerbaijan intensified Wednesday, despite a cease-fire deal. Los Angeles is home to the largest population of Armenians outside the country itself. Last weekend, tens of thousands of Armenian Americans and supporters marched to the Turkish consulate in Beverly Hills to decry violence in the border region of Nagorno-Karabakh, also called Artsakh. The deadly dispute over land largely populated by ethnic Armenians has raised painful memories of the Armenian genocide, which Turkey still denies. Earlier this month, elected officials from the L.A. area gathered at City Hall to demand action to halt Azerbaijan’s attacks. Tap the link in our bio for more. #armenia #losangeles #ktla