Terrell Brown is an American news anchor for ABC 7 Eyewitness News since April 2014. Brown anchors 4:30 to 7:00 am and also the 11 am weekday newscasts at the WLS-TV television station in Chicago. In his career, Brown was recognized with an Emmy for “Best News Anchor” in the Chicago/Midwest Emmy Awards competition.

Brown has managed to keep his personal life away from the limelight hence he has not disclosed any information about her parents. It is also not known if Brown has any siblings.

Brown has not yet disclosed his marital status in public but he has been rumored to be dating Ashley Nicole. Although the two have never confirmed nor denied this, Brown keeps posting pictures of her on his Instagram when they are out on events.

Brown has an estimated net worth of about  $ 1 million- $ 5 million which he has earned through his career as a news anchor. 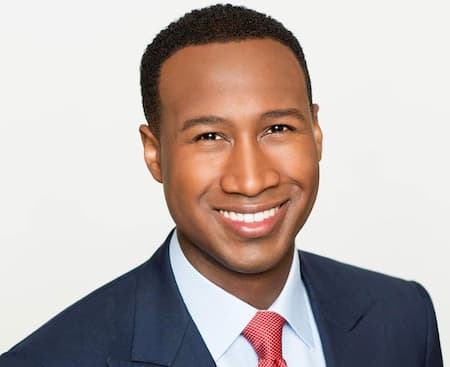 The table below answers some of the frequently asked questions about Brown.

Brown attended Matoaca High School in Chesterfield County. He founded the school’s television production which has been active ever since. Brown joined Commonwealth University in Richmond and graduated with honors in 2009. He was awarded a full-term scholarship by National Press Club for broadcasting excellence on television.

Brown has reported extensive coverage of the 2016 Chicago Cubs World Series Championship win during his ABC 7 tenure. He has as well anchored live from natural disasters, Illinois, telling the stories of people in Coal City and Fairdale, after tornadoes devastated their hometowns.

His ability to make viewers and live audiences feel at home has made him a natural to be tapped for many of ABC 7’s programming efforts. He frequently fills in as co-host of Chicago’s #1 daytime talk show, Windy City LIVE. Additionally, he has hosted ABC 7’s Pride Parade broadcast, the hour-long, and the Columbus Day Parade, nationally syndicated special, The Magnificent Mile Lights Festival.

Brown hosted two events for the City of Chicago (DCASE), the 2019 Chicago Gospel Music Festival, and the 2018 Chicago SummerDance Celebration, and also the Boys and Girls Clubs of America Midwest Youth of the Year” Celebration, sponsored by Disney. Brown has been a regularly featured reporter on the Bud Billiken Parade, the second-largest parade in the United States, and the largest African-American parade.

Before joining ABC 7 Eyewitness News, he was an Anchor/Correspondent at CBS News where he anchored Up to the Minute, the CBS Morning News and served as a fill-in anchor for the weekend editions of CBS Evening News. As an anchor, he has covered some of the nation’s biggest stories including the BP Gulf oil spill and Boston Marathon bombing.

Brown is currently working at ABC7 Chicago where he works alongside other famous ABC7 Chicago anchors and reporters including;