Chris Schauble is an American award-winning broadcast journalist, anchor, and reporter who is at KTLA working as a news anchor in Los Angeles.

Schauble has a passion for his career, family, and health. Having completed three Ironman events, including the Ironman World Championship in Kailua-Kona, Hawaii, he is a former marathoner and triathlete. For eight years as a USATF Level 1 Mentor, Chris also coached youth track in the greater LA area. He helped hundreds of athletes become All-Americans during that period.

Schauble is 50 years old as of 2020. He was born in 1970, in Florida, United States of America. It is therefore not known when he celebrates his birthday.

Schauble stands at an average height. However, his exact height is not yet disclosed but will be updated as soon as his body measurements are available.

His birth mother is Virginia Robinson, an Italian American from Connecticut, and his late father, John Charles ‘J.C.’ Robinson,  an American from Florida. Schauble is an adoptee who was brought up by caring for adoptive parents and is very pleased with who he is. In October 2013, Schauble began to look for his birth mother at the age of 44 and found them after a six-month.

In the late 1960s, at a period when interracial relations were still taboo, Robinson met his birth mother, Virginia, and his father, an African, John Charles, J.C. In Florida, he visited his father’s grave. 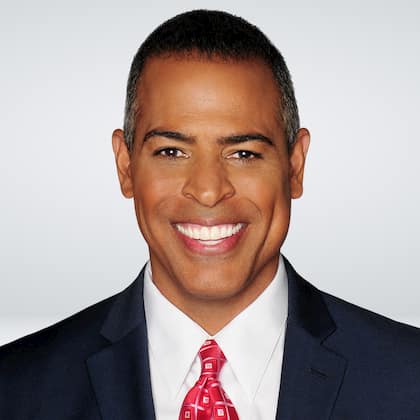 Schauble met his brother J.C. Robinson, Jr. for the first time in Florida while visiting his father’s grave. His birth mother has three children from her previous marriage.

Chris is married to Katrina Schauble. The couple has two sets of twin daughters. The family lives in Los Angeles in the United States of America.

Schauble has an estimated net worth of between $1 Million-$5 Million which he has earned through his career as a Journalist.

Chris is the KTLA 5 Morning News co-anchor from 4 a.m. Towards 7 a.m. Weekdays. Chris has won numerous honors, including five Emmys and six Golden Mics, since moving to Los Angeles in 2001.

Chris spent time at KCNC-TV in Denver prior to his Los Angeles job, where he covered a variety of national stories. His coverage of the shootings at Columbine High School helped win the station a regional Emmy for spot reporting. Chris was named “Television Journalist of the Year” by the Colorado Association of Black Journalists in 2000 and was honored by Urban Spectrum Magazine as one of Denver’s Top 10 History Makers in 2001.

Schauble studied and graduated from Fort Lewis College in Durango, Colorado with a Bachelor of Arts in broadcast journalism. He was awarded the 2002 “Distinguished Alumni Award by the College.

Schauble is currently working at  KTLA 5 where he works alongside other famous  KTLA 5 anchors and reporters including;