Frank Vascellaro is an American news anchor for WCCO since joining the station in 2006. He co-anchors the 5 p.m., 6 p.m., and 10 p.m. news Monday through Friday alongside his wife. On June 29, 2006, the couple became the first married couple to co-anchor a daily news program in the Twin Cities.

Vascellaro stands at a height of 6 feet 5 inches tall.

Vascellaro was born of the late Rosalie Marie Vascellaro and her late husband, Sam. His mother was a homemaker as well as a teacher’s aid for 25 years at the Holm Elementary School. Besides, she was a regular on the WCCO-TV channel where she shared her recipes on her own segments, “The Grannies” which she hosted with her friend Doris Rosen.

She passed away in June 2018 after a short illness. She was 94 years old at the time of her death. Vascellaro has a sister Angela. Besides, he has an uncle to his two nieces.

Frank married Amelia Santaniello in 1999 in Florence, Italy. They first met in 1996 and moved to Minnesota and later tied the knot in 1999. The couple resides in Minneapolis, Minnesota. The couple is blessed with 3 children, twins named Francesca and Joseph, and also another son named Sam. The family also has two pet dogs. 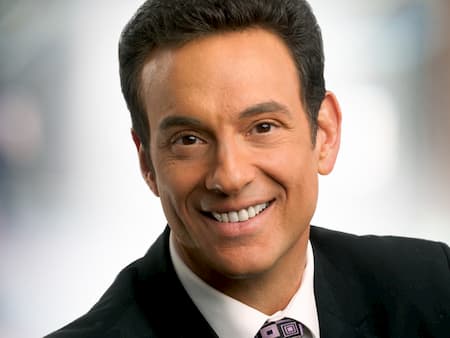 Vascellaro has an estimated net worth of between $1 Million – $5 Million which he has earned through his career as an anchor.

Prior to joining WCCO, Vascellaro worked at WAND-TV in Decatur, Illinois, and at WHOI-TV in Peoria, Illinois as an anchor/reporter.

He grew up in Denver Colorado and attended the United States Air Force Academy before transferring to the University of Colorado at Boulder. Vascellaro later studied broadcasting at Columbia College in Chicago, Ill.

In 2008, he was recognized by The Society of Professional Journalists with its broadcast award for Investigative Reporting. Vascellaro was awarded the 2011 and 2012 Regional Emmy for Best Anchor. Vascellaro and his wife, Amelia are deeply involved with the community and frequently serve as the master of ceremonies at some of the Twin Cities premier charity events.

Vascellaro is currently working at  WCCO where he works alongside other famous  WCCO anchors and reporters including;