Ginnifer Goodwin ( born Jennifer Michelle Goodwin) is a famous American actress. She is best known for her different roles appearing in different films. Goodwin has featured in films such as the drama Mona Lisa Smile (2003), the musical biopic Walk the Line (2005), the romantic comedy He’s Just Not That Into You (2009), the family comedy Ramona and Beezus (2010), the romantic comedy Something Borrowed (2011), and the biopic Killing Kennedy (2013). She also played Fawn in Disney’s animated fantasy film Tinker Bell and the Legend of the Neverbeast (2014) and Judy Hopps in Disney’s animated comedy film Zootopia (2016).

Goodwin was born in Memphis, Tennessee to a Jewish mother Linda Kantor Goodwin, a former teacher who also worked for FedEx, and Tim Goodwin, who formerly owned and operated a recording studio. She has a younger sister by the name of Melissa Goodson a stop-motion animator on shows such as Robot Chicken.

Goodwin dated actor Joey Kern they later got engaged in December 2010. They called it quits in May of 2011. In late 2011, Goodwin began dating her Once Upon a Time co-star Josh Dallas. They were engaged in October 2013, and married on April 12, 2014, in California, the two have two sons, born in May 2014 and June 2016. Oliver Finlay Dallas is their first kid, and Hugo Wilson Dallas is their second child

She earns an estimated salary of $800 Thousand (Annually). 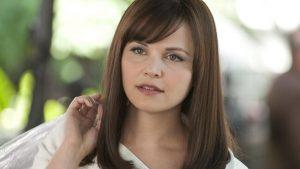 Goodwin is an American actress who has an estimated net worth of $8 million.

The table below answers some of the frequently asked questions about Goodwin.

Ginnifer was educated at St. Mary’s Episcopal School in Memphis, Tennessee. He graduated from Lausanne Collegiate School in 1996. She later earned a Bachelor of Fine Arts degree from Boston University.

She starred in the film portraying Diane Snyder, playing the role of a smart and assertive student who is Warren’s friend and later Mark’s girlfriend. The film The show revolves around Ed Stevens, a hotshot New York lawyer who, on the same day he is fired from his job comes home to discover his wife having an affair with a mailman that she claims she met at Starbucks. Dejected, Ed decides to return to his (fictional) hometown of Stuckeyville, Ohio, to spend some time. Upon his arrival, he is reunited with friends that he has missed, as well as Carol Vessey, his high school crush. Determined to win her heart, Ed decides to stay, buying a rundown bowling alley and setting up a new law firm in the process, earning him the undesired nickname “The Bowling Alley Lawyer” which leads him to make a distinction to a judge during one of his first trials: “I am a lawyer, I own a bowling alley. Two separate things.” The film was released on February 6, 2004.

Ginnifer Goodwin Once Upon a Time

Goodson has cast as the star in the leading role Snow White / Mary Margaret Blanchard in the film Once Upon a Time. It revolves between two main settings: a fantastical world where fairy tales happen; and a fictional town in Maine called Storybrooke. The “real-world” part of the story unfolds with the characters of Emma Swan (Jennifer Morrison) and her 10-year-old son, Henry Mills (Jared S. Gilmore). Henry discovers the other people of the town are fairy-tale characters.

She starred in the film portraying Vivian Cash. The film follows Cash’s early life, his romance with June Carter, and his ascent in the country music scene. It stars Joaquin Phoenix as Cash, Reese Witherspoon as Carter, Ginnifer Goodwin as Cash’s first wife Vivian Liberto, and Robert Patrick as Cash’s father. premiered at the Telluride Film Festival on September 4, 2005, and was theatrically released by 20th Century Fox on November 18. The film received positive reviews and grossed $187 million on a $28 million budget. It received five nominations at the 78th Academy Awards.

Goodwin began her career in minor roles on television shows such as ‘Law & Order’ and ‘Ed,’ before moving on to larger roles. She made her film debut in 2003 with ‘Mona Lisa Smile,’ followed by ‘Win a Date with Tad Hamilton!,’ ‘Walk the Line,’ and ‘Love Comes to the Executioner.’ Following that, she had a recurring role as a voice actress in the show ‘Robot Chicken.’ She was then cast as Margene Hoffman in the TV series ‘Big Love’ in 2006. The following year, Goodwin appeared in two films, ‘In the Land of Women’ and ‘Day Zero.’

From 2009 to 2011, she worked on a variety of small and large-screen projects. These projects include the TV shows ‘Crappy Holidays Presents…,’ ‘SpongeBob SquarePants,’ and ‘Margene’s Blog,’ as well as the films ‘He’s Just Not That Into You,’ ‘A Single Man,’ ‘Ramona and Beezus,’ ‘Take Me Home Tonight,’ and ‘Something Borrowed.’ Around this time, Goodwin was also approached about the television film ‘Five.’ She was then cast as Snow White in the television series “Once Upon a Time.”