Jim Sciutto is an American journalist working for CNN serving as a Chief national security correspondent and co-anchor. He has been working with the station since September 2013.

Sciutto stands at a height of 6 feet 1 inch tall.

Sciutto has managed to keep his personal life away from the limelight hence he has not disclosed any information about his parents. It is also not known if he has any siblings.

Sciutto is married to Gloria Riviera, who works as a correspondent for ABC. They tied the knot in 2006. Additionally, the two are blessed with three children named Tristan, Caden, and Sinclair.

Sciutto has an estimated net worth of between $1 Million-$3 Million which he has earned through his successful career as a Chief national security correspondent and co-anchor. 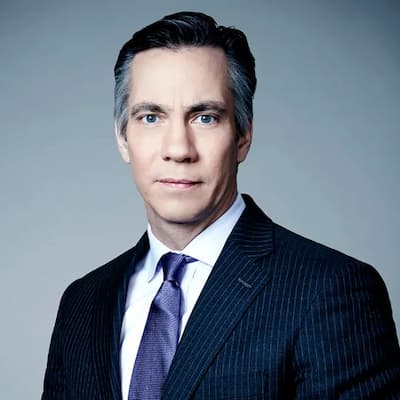 Sciutto went to St. Ignatius Loyola School before transferring to Regis high school in Manhattan. He majored in Chinese history and graduated with honors from Yale University in 1992.

Sciutto serves as a chief national security correspondent and co-anchor at CNN on Newsroom airing Monday through Friday from 9 to 11 a.m. ET al alongside Poppy Harlow. Jim reports across the platforms and programs s on all aspects of U.S. national security including the State Department, the intelligence community, the military, and foreign policy. Additionally, he has reported from more than 50 countries across the globe including dozens of assignments from inside Iran, Iraq, and Afghanistan.

Before joining CNN, Sciutto worked as a Hong Kong-based correspondent for Asia Business News and as ABC News’ senior foreign correspondent. Moreover, he began his journalism career as a producer of a weekly public affairs talk show on PBS and as the moderator. In addition to that, Jim has also served as a senior advisor to the U.S. Ambassador to China, Gary Locke, and as chief of staff. Furthermore, he was a Fulbright Fellow in Hong Kong and a member of the Council on Foreign Relations, and an associate fellow at Pierson College at Yale.

Besides  Sciutto being a journalist, he is also an author. Jim has a book called Russian and Chinese efforts to undermine the U.S. That is entitled The Shadow War, published in 2019, and an inside look at President Trump’s foreign policy, entitled The Madman Theory: Trump Takes on the World, published in 2020, both by Harper Collins. His first book, Against Us: The New Face of America’s Enemies in the Muslim World, analyzes the driving forces behind Islamic radicalization.