Lynette Romero is an American Emmy Award-winning journalist and television personality who is currently working as an anchor and reporter for the KTLA 5 Morning News.

Romero is 55 years old as of 2021. She was born on 2 February 1967 in Denver, Colorado USA. She celebrates her birthday on 2 February every year.

Lynette stands at a height of 5 feet 6 inches tall.

Romero has managed to keep her personal life away from the limelight hence she has not disclosed any information about her parents. It is also not known if Romero has any siblings.

She is married to David Angulo. The couple met in January of 1994 and wedded on 12 July 1993. The couple has a daughter Olivia who was born on 2 August 2003. The family lives in Los Angeles, California. In addition, on July 11, 2015, she shared a post on her Instagram account about her 12 year wedding anniversary.

Romero has an estimated net worth of between $1 Million $5 Million which she has earned through her career as a Journalist. 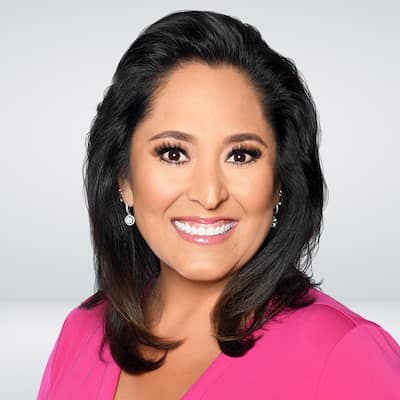 The table below answers some of the frequently asked questions about Romero.

She has a Bachelor of Science degree from the University of Colorado in Boulder, Colorado, in journalism and television news. Lynette first arrived in January 1999 as a general assignment reporter for KTLA.

She got a second Golden Mike Award for the best 60-minute evening show together with her new peers during her tenure at KTLA. She is also a local recipient of the Emmy Award for reporting the best feature news. For her role as a reporter/anchor for the show called “Access L.A.,” Lynette won a Golden Mike and a local Emmy Award. In 2006, she also received a local Emmy as a reporter and producer for the five-part series called “From Farm to Fork,” The Latino Experience.

She spent ten years anchoring and reporting on KUSA-TV in Denver before joining KTLA. She also spent nearly a year working for KUSA-TV ‘s KVUE-TV sister station in Austin, Texas. When she was in Denver, Lynette’s duties included the Waco standoff, the papal visit of 1993, and the bombing of the Oklahoma City Federal Building.

She brings extensive news experience to her job. From August 2000 to October 2004, Lynette was co-anchor of ‘KTLA Prime News.’ Lynette is also a member of the University of Colorado’s advisory board for the School of Journalism and Mass Media and a member of the National Association of Hispanic Journalists. She teaches an anchor and reporting class for UCLA Extension. She spends much of her private time in the community where she speaks and performs in local schools at government functions.

Romero is currently working at  KTLA 5 where she works alongside other famous  KTLA 5 anchors and reporters including;

Meet my EP @mazen_hafez @ktlaweekendam He encouraged me from the beginning to share my #intermittenfasting journey with you AND show my before and after pictures. It wasn’t easy but I am so glad that I did. Because now I have all of you in my life. 🦋