Cheryl Burton is an American 13-time Emmy Award-winning anchor/reporter. She has been working as a news anchor for ABC 7 Chicago (WLS-TV) in Chicago, Illinois since joining the team in 1992 as a weekend co-anchor and reporter.

Burton is the fourth of five kids having three sisters and a brother. Her mom, Hattie, taught in the Chicago Public Schools system for more than three decades. Both her parents were born and raised in the South and eventually settled in Chicago in the 1950s.

Burton was married to Jim Rose who is an American sports anchor currently working for ABC 7 Chicago, the ABC affiliate in Chicago, Illinois since joining the station in January 1982. The couple tied the knot in 1986 and divorced in 1995. They were not blessed with any children together. Since then, she has not been in any relationship again.

Burton has an estimated net worth of about ‎$1 million – 5 Million which she has earned through her career as an anchor/reporter. 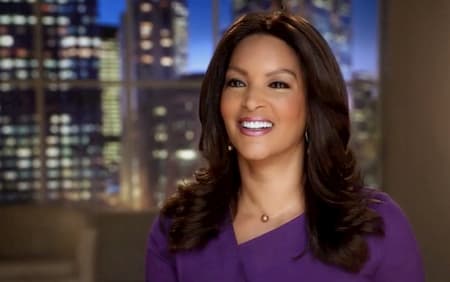 The table below answers some of the frequently asked questions about Burton.

Burton attended Lindblom Technical High School (now known as Lindblom Math & Science Academy) in 1980. She graduated from the University of Illinois at Champaign-Urbana where she earned her B.S. in Psychology and Biology. Additionally, she became a member of Delta Sigma Theta Sorority. Burton became the first alumnus inducted into the school’s hall of fame in 2007.

She anchors the station’s 5 p.m. and 10 p.m. newscast alongside Alan Krashesky and before she was the anchor for the 7 pm newscast on WCIU-TV alongside Hosea Sanders. Burton was a promotion in contribution from contributing anchor to anchor of the station’s 10 PM newscast in June 2018.

Her career as a reporter has taken her to the heart of Chicago neighborhoods, across the United States, and around the globe. One of the highlights for her profession become masking the ancient inauguration of President Barack Obama. Whether she’s covering the opening of Oprah’s school for girls in South Africa, or assessing the aftermath of Hurricane Katrina, exposing the plight of one of Illinois’ poorest schools, Burton brings compelling stories home to Chicago.

She is committed to exposing injustices and bringing the stories of the underprivileged to the forefront. She interviews sports figures, celebrities, world leaders, political candidates, and ordinary citizens with her trademark warm and discerning approach that makes viewers receive a special perspective of people in the news. Her reporting style has been described as refreshing, investigative, committed, informative, and smart.

Prior to joining ABC 7 Chicago, she was a weeknight anchor for the 6 pm news at KWCH-TV in Wichita, Kansas. She was recognized for her role in a campaign that was instrumental in reducing the number of low birth-weight babies and infant deaths at the KWCH-TV station. She as well hosted the talk show “Viewpoint” (1990-92).

She served as a general assignment reporter for WMBD-TV in Peoria, Illinois in 1990. She started her broadcasting career at Chicago’s WGN-TV as co-anchor of the nationally syndicated weekly series “MBR: The Minority Business Report” (1989).

She is proudly active in the Chicago community and gives much of her time to non-profit groups and charities. Cheryl is a volunteer for the Boys and Girls Club of America and serves as a motivational speaker for the Chicago Public Schools. She serves on the boards of the Life with Lupus Guild, City Year, and the Multicultural Dance Center.

Burton is currently working at ABC7 Chicago where she works alongside other famous ABC7 Chicago anchors and reporters including;