Jennifer Gould is an American award-winning broadcaster currently working on the KTLA 5 Morning News in Los Angeles. Her career spans over 20 years, with experience spanning from breaking news and features to the wide world of sports, health, and entertainment.

Jennifer stands at an average height. However, her exact height is not yet disclosed but will be updated as soon as her body measurements are available.

Jennifer has managed to keep her personal life away from the limelight hence she has not disclosed any information about her parents. It is also not known if Jennifer has any siblings.

Jennifer is married to Mark Kriski, her fellow KTLA worker who previously served as a DJ on Victoria, British Columbia’s Q-100 FM. The couple got engaged on May 18, 2011, and married on September 24, 2011.

Gould has an estimated net worth of between $1 Million $5 Million which she has earned through her career as a Journalist. 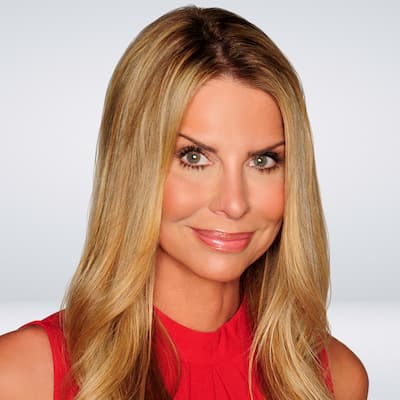 Jennifer was a sports anchor/reporter at KTTV prior to KTLA. The NBA, MLB, NFL, and NHL were covered by her. She also produced Better Bodies, a fitness franchise, and anchored it. Jennifer also submitted reports for her Jenn-X interactive extreme sports segment, which she created and produced. In 2003, Jennifer won a Golden Mike Award for Best Sports Reporting for her enterprising skills. The Press Club of Los Angeles also remembered her.

Jennifer also anchored the weekend newscasts for their sister station, KCOP, while sports anchoring and reporting for KTTV.

Jennifer held two full-time jobs when her career began: one at KSWT, an ABC affiliate, and the other at Telemundo Cable Network, where she produced and anchored Spanish-language news. As a weekend anchor and general assignment reporter, she then moved to KOLD, the CBS affiliate in Tucson.

Jennifer went from Arizona to WFOR, the Miami, Florida, CBS-owned-and – operated station. There she reported stories ranging from the 2000 Presidential Election ballot dispute and the diplomatic custody battle of Elian Gonzalez between the United States and Cuba to the murder of fashion designer Gianni Versace and the crash of ValuJet. During the Doral-Ryder Open golf tournament, she also co-hosted the 1997 Marlin’s World Series victory parade and filed feature papers.

From 1996 until 1999, she was the morning anchor and a general assignment reporter. She was then promoted to noon anchor on weekdays and 5:30 p.m. About newscasts. She hosted The Scene, an entertainment show at the same time; was WMXJ-FM ‘s weekday morning newsreader; and produced, wrote, and anchored Wednesday’s Boy, profiling kids available for adoption.

Additionally, Gould was featured as a crime reporter/contributor on several episodes of the true-crime shows My Dirty Little Secret and The Perfect Murder on the Investigation Discovery Network, as well as In Freezing Cold Blood on the Oxygen Network. Production companies also check her out as an expert on crime and unsolved mysteries.

Gould is currently working at  KTLA 5 where she works alongside other famous  KTLA 5 anchors and reporters including;

Jennifer, who is self-adopted, has won the Simon Wiesenthal Center’s National Leader of the Future Award for helping to place 22 children in loving homes. For her achievement, she was featured on the cover of ‘Dimensions Magazine’. Jennifer has also published, pending publication, a semi-autobiographical book about adoption, The Missing Piece. Jennifer continues her commitment to locating children’s homes. She was appointed the honorary chair of the Foster Family Program of the Los Angeles Junior Chamber of Commerce in 2004.

In 1993, Jennifer received the Best Newscast Arizona Associated Press Award. For her philanthropic work on behalf of adoption, she was also recognized by the State of Florida, Florida Gov. Jeb Bush, and former President Bill Clinton. She has appeared in many advertisements and movies, such as The Doors, Hero, and Forever Young. She has been featured in Choice Extreme Sports Magazine, Miami Herald, Sun-Sentinel, Channel Magazine, and Miami Metro Magazine.

📷:©JenniferGould Feeling on top of the world this Monday morning cause I'm on the roof! . . #monday #mondaymorning #mondaymood #work #working #rooftop #roof