Craig Melvin is an American Emmy award-winning broadcast journalist and anchor who currently works at MSNBC and NBC News. He was able to secure a job as a news anchor on NBC’s Today in August 2018, and later on, he became a co-host of Today Third Hour in October, and in January 2019 he was made permanent.

While he was still in high school, he joined  NBC-affiliate WIS-TV in Columbia, South Carolina where he worked from 1995 to 1997 as an “Our Generation Reporter”. He attended Wofford College where he received a  Bachelor of Arts degree in government in 2001. He serves as a senior counselor for South Carolina’s Palmetto Boys State program and a member of the Kappa Sigma fraternity.

In July 2001, he relocated back to WIS where he was able to secure a job as a producer and news photographer. Later on, he became a reporter for the station’s morning news team whereby he produced his “Craig Cam” live segments. Not long after he was promoted to being a news anchor for the weekend morning newscast and the weekend evening newscasts before heading the weekday newscasts. While he was at WIS-TV, he created several series that covered issues affecting the homeless in Columbia and education, among many others.

He left WIS-TV in July 2008 and joined Washington, D.C’s NBC-owned-and-operated station where he served as a weekend evening anchor. later in July 2011, he left WRC-TV  and joined MSNBC as a daytime anchor, and in addition, he still contributed to NBC News as a reporter. Additionally, he covered MSNBC TV One’s Election Night, the national conventions for the Republican and Democratic parties in partnership with NBC News.

In December 2012, he covered the Sandy Hook shootings, the shooting of Michael Brown in August 2014, in September he covered the murder of Hannah Graham, the Charleston church shooting as well as the death of Freddie Gray in June 2015, the mass shooting of Dallas police officers in July 2016, he covered the Moore tornado in May 2013, he also covered the crash of Asiana Airlines Flight 214, the George Zimmerman trial in July. Additionally, in August 2016 he was among the NBC reporters covering the Summer Olympics in Rio de Janeiro. Furthermore, he was able to succeed José Díaz-Balart as the anchor of MSNBC Live.

In February 2018, he reported for NBC from Pyeongchang County on the coverage of the Winter Olympics. Later on, in September, he was promoted to weekday news anchor on Today and he formed the cast of hosts heading Today Third Hour in October. He also had the privilege of co-hosting NBC’s annual broadcast of the lighting of the Rockefeller Center Christmas Tree in December 2020. 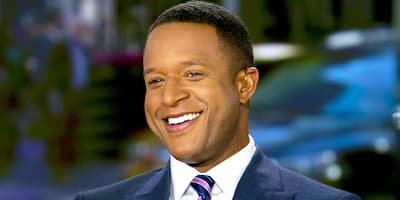 Melvin stands at a height of 5 feet 7 inches tall and he weighs 84 kg.

Melvin is born to Lawrence and Betty Melvin. He has a younger brother, Ryan Melvin, and an older half-brother, Rev. Lawrence Meadows who died from colon cancer on December 9, 2020, at the age of 43.

Melvin is married to Lindsay Ann Czarniak who happens to be a sports anchor and reporter for Fox Sports. They tied the knot on October 11, 2011. Together the couple has been blessed with two children, a son named Delano who was born in March 2014, and a daughter named Sybil who was born in November 2016.

Melvin has an estimated net worth of between $1 Million – $5 Million which he has earned through his career as an anchor.