David Wright is an American Emmy award winning anchor and reporer who is currently working at ABC News. He joined the ABC News team in November 2000,as a correspondent in the network’s Los Angeles bureau,and was posted to London, Washington and New York. Currently, he serves as ABC News correspondent and anchor of World News Tonight, Nightline, and Good Morning America. He can also be seen  reporting news to ABC News President James Goldston. In his carrer he has travelled all over the worled, and covered major news events in the United States and overseas.

In 2016, he was the  lead political reporter for Nightline covering the presidential campaign. Regurdless of the fact that he is currently in New York, he travely weekly to lend a hand to ABC’s White House team cover the Trump administration. For over 15 years he has been serving  with the  ABC’s News team. Being a long-term serving anchor, has given him the oportunity to interview six United States presidents, covered two papal transitions, and report from six continents.He has also profiled Hollywood stars and interviewed pioneering tech entrepreneurs such as Mark Zuckerberg andElon Musk. In additon, has been on the frontlines of revolutions, natural disasters, nuclear meltdowns, humanitarian crises, terror attacks, and wars,

He reported from Gaza at the height of the Israeli bombardment in 2014. Hours before the IDF bombed the airport, he has landed in Beirut during Israel’s war with Lebanon in 2006, and he prologed his stay till the conflict was resolved. For more than twelve times he traveled to Iraq from before the United States invasion to the surge. During the ABC’s ongoing “Where Things Stand” project, his reports fom Baghdad and Fallujah shared an Emmy award in 2004. The judges of the George Foster Peabody Awards cited his extensive coverage from Afghanistan as part of ABC’s overall coverage of Sept. 11 and its aftermath. In 2005, his reporting in Sudan o the Darfur genocide, won an Overseas Press Club Award and an Emmy award.

During his career livetime, he has had some outstanding experiences such as tracking polar bears on the shores of Hudson Bay, searching remote stretches of the Indian Ocean for a missing Malaysian airliner, sitting face-to-face with mountain gorillas in Congo, and hiking the Hindu Kush in the dead of winter after an earthquake. he covered Republican maverick John McCain during the 2008, general election. Furthermore, during the historic bid for the presidency by Barack Obama, he covered and travelled with Obama for the better part of a year. In addition, he accompanied both Pope Benedict during his visit to Europe and the Middle East, and Pope Francis during his visit through Africa and South America.

His has had the prevealge to secure a seat in historicall ocations due to his career. The night when Obama became the first African-American president, he was in St. Paul covering the historic event. Another historing event that he covered was the night Pope John Paul II died where by he reported live from the Vatican. In addition, from New York he repored he Taliban fell and from New York City, and from Kabul he reported the Taliban fall. He was live at St, Peter’s Square as white smoke proclaimed the election of Pope Benedict XVI. In 2006, the ABC’s papal coverage won the Alfred I. duPont-Columbia University Award. 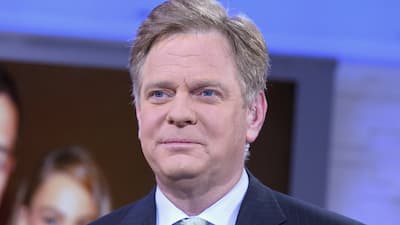 Wright is 56 years old as of 2020. He was born in 1964, in Buffalo, New York, United States. He likes to keep his personal life private hence he has not revealed the date or month he was born.

Wright stands at an average height. However, his exact height is not yet disclosed but will be updated as soon as his body measurements are available.

Wright’s father is Dr. John Wright a former professor and dean at the University at Buffalo School of Medicine. His mother was Deanna Wright who later on passed away. He likes to keep his personal life private hence there is no information on his siblings.

Wright is married to Victoria Brannigan who happens to be the former producer of Sky News. They met in Rome while they were both covering Pope John Paul II funeral. Later on, they got engaged at the Basilica of Santa Maria in Trastevere on October 29, 2005, a Roman Catholic ceremony. Together the couple has been blessed with three children whose names he has not mentioned as he likes to keep his personal life private. He resides in Manhattan, New York together with his family.

Wright has an estimated net worth of between $1 Million – $5 Million which he has earned through his career as an anchor and reporer.