Kate Snow is an American Emmy award-winning anchor who is currently working at MSNBC. She serves as the Senior National Correspondent for MSNBC,  Dateline NBC,  Today, and NBC Nightly News. In addition, she also serves a the anchor of NBC Nightly News Sunday. She joined the MSNBC news team in 2015, as the anchor of MSNBC Live.

She attended  Georgetown University where she attained a master’s in foreign service and also graduated from Cornell University. From 2004 to 2010, she served as a co-anchor for the weekend edition of Good Mornin America on ABC, and later in 2010, she joined NBC News. Furthermore, she has made appearances on World News as a fill-in anchor and correspondent. Additionally, she was a correspondent for Rock Center with Brian Williams NBC newsmagazine which has been now canceled.

Before she co-hosted the morning show’s weekend edition, she served as Good Morning America‘s White House reporter for ABC in 2003. Previously, she worked at KOAT-TV in Albuquerque, New Mexico, from 1995–1998 as a reporter, at CNN from 1998–2003, NBC Radio, and at NPR.

She was ABC News’ correspondent covering the 2004 Democratic National Convention, Sarah Palin’s campaign for vice president, and Hillary Clinton’s presidential campaign during the 2008 presidential race. In 2010, she joined NBC News as a correspondent for Dateline NBC and a contributor to other NBC programming. Later on, she started anchoring the Sunday broadcast of NBC Nightly News in September 2015. Additionally, she began hosting a two-hour block on MSNBC Live in the same month.

For her interview with many women including Andrea Constand who had accused Bill Cosby of committing sexual assault, which aired on Dateline NBC, she won a  News & Documentary Emmy Award. Later on, she left her role at MSNBC and joined NBC News as a Senior National Correspondent in April 2017, where she covered several stories for NBC Nightly. News, Dateline NBC, and Today.

She began hosting Relentless a true-crime television series that aired on Oxygen. In addition, she is on the national board of Big Brothers/Big Sisters of America and is a member of the Department of Communication’s advisory council at Cornell University. 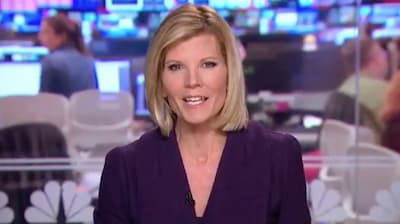 Snow’s father is known as Dean R. Snow a former professor. She has a younger sister called Barbara Snow who she grew up together with when they relocated to New York. She has however not mentioned the name of her mother as she likes to keep her personal life private.

Snow is married to Chris Bro who happens to be a radio presenter. They got married on September 25, 1999, and together they have been blessed with two children; a son who they named Zack and a daughter named Abby

Snow has an estimated net worth of between $1 Million – $5 Million which she has earned through her career as an anchor.