Ali Velshi is an American anchor who is currently working at MSNBC. He serves as the host of “Velshi” which airs on weekends from 8 am to 10 am on MSNBC. In addition, he anchors “The Last Word”which airs on Fridays at 10 pm. Furthermore, he is a co-anchor with Stephanie Ruhle of Velshi & Ruhle on MSNBC and the senior economic and business correspondent for NBC News.

In Kingston, Ontario he attended Queen’s University where he earned a degree in religious studies. He organized protests against Preston Manning and Canada’s Reform Party while he was at Queen’s. Later on in 2011, he was awarded the Queen’s University Alumni Achievement Award. For his high school education he attended Northern Secondary School where he was elected as te school president.

Previously, he was known for his work on CNN as he served as the anchor of CNN’s Your Money, co-host of CNN International’s weekday business show World Business Today and the Chief Business Correspondent. Later on in 2013, he joined Al Jazeera America where he anchored  Ali Velshi on Target till April 12, 2016 when te channel spoped operating. From then he joined MSNBC in the same year and has been serving in the station since then.

his career in journalism began at CFTO as a General Assignment reporter. Later on, he joined CablePulse 24 and its then sister station CityTV where he served as a General Assignment reporter. Furthermore, he joined Report on Business Television which is currently known as (BNN Bloomberg – Business News Network) where he anchored  The Business News, Canada’s first prime-time business news hour.

From the start he co-anchored Velshi & Ruhle show alongside Stephanie Ruhle at 1 pm and in addition. he had a 3 pm program called MSNBC Live with Ali Velshi. furthermore he was appointed as a fill in host of the Friday edition of The Last Word with Lawrence O’Donnell. Later in December 2019, he was moved to weekend morning with his own show called simply as Velshi, a 2-hour solo act.

He was awarded the Queen’s University Alumni Achievement Award in 2010, which happens to be the highest award given to Queen’s University alumni. In addition, he received a National Headliner Award for Business & Consumer Reporting for his report for CNN’s “How the Wheels Came Off” about the near collapse of the U.S. Auto Industry. Furthermore, he was nominated for an Emmy in 2010, for his report for CNN’s global breaking news coverage of an attempted terror attack on a Delta flight into Detroit on Christmas Day 2009. Later on in 2015, for his contributions at Al Jazeera he was nominated for two more News & Documentary Emmy awards. He gave a TEDx talk entitled “How Fake News Grows in a Post Fact World.” in 2017. 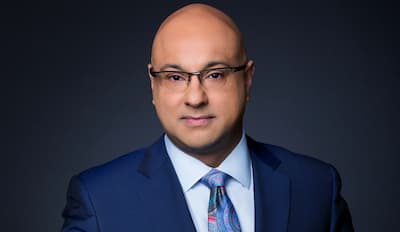 Velshi stands at a height of 5 feet 9 inches tall.

Velshi’s father is known as Murad Velshi while his mother is known as Mila. His parents owned a bakery in South Africa. He has not revealed any information regarding his siblings as he likes to keep his personal life private.

Velshi has been divorced twice. He was first married in his early twenty’s but there is no information about his first marriage. Later in 2009, he got married for the second time to Lori Wachs a New York-born hedge fund manager. She was the president of Philedalfia based cross Ledge investments. together they were blessed with a daughter who he has not mentioned her name as he likes to keep his personal life private.

Velshi has an estimated net worth of between $1 Million – $5 Million which he has earned through his career as an anchor.