Sara Eisen is an American journalist who is co-anchor of CNBC’s “Closing Bell” (M-F, 3 PM-5 PM ET). She joined the station in December 2013 as a correspondent, focusing on the global consumer.

Eisen is 35 years old as of 2021. She was born as Sara Aliza Eisen in Cincinnati, Ohio, United States. It is however not known when she celebrates her birthday.

Eisen is the daughter of Drore Eisen and Jane Eisen. It is however not known if she has any siblings.

Eisen is married to Matthew Stone Levine and the couple is blessed with two children. The couple tied the knot on May 29, 2016, at Weylin B. Seymour’s, an event space in Brooklyn. Her husband is a director at Brunswick Group, a strategic advisory firm.

Eisen has an estimated net worth of about $1 Million -$5 Million which she has earned through her career as a journalist. 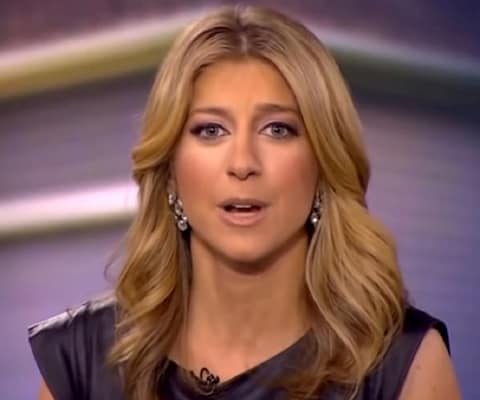 The table below answers some of the frequently asked questions about Eisen.

She attended the Medill School of Journalism at Northwestern University where she received her master’s degree in broadcast journalism with a concentration in business reporting.

Eisen is well known for her deep expertise in financial markets and the global economy as well as regular news-making interviews with some of the most prominent names in the financial world, including Leon Black, Phil Knight, Christine Lagarde, and Janet Yellen among others.

Before joining CNBC, she was co-anchor of “Bloomberg Surveillance” and also a correspondent for Bloomberg Television, where she covered global macroeconomics, policy, and business. During that time, Eisen covered the European debt crisis, the Fukushima nuclear crisis in Japan, and the tsunami aftermath. Additionally, she hosted the Bloomberg Radio program, “On the Economy.”

In January 2013, Eisen edited “Currencies After the Crash: The Uncertain Future of the Global Paper-Based Currency System” which was published by McGraw-Hill.

Eisen is currently working at  CNBC  where she works alongside other famous  CNBC  anchors and reporters including;