Jim Rose is an American sports anchor and reporter for ABC 7 Chicago since joining the team in January 1982. He reporters for the ABC 7 top-rated 4:00 and 6:00 p.m. newscasts. He as well plays a major role in the station’s programming specials. Before working at WLS-TV, he worked for WIXT-TV in Syracuse, New York.

Rose stands at a height of 6 feet 1 inch tall.

Rose has managed to keep his personal life away from the limelight hence he has not disclosed any information about his parents. It is also not known if he has any siblings.

Jim is married to Lakesha Draine since 2011. The couple is blessed with 2 children Jayson & Suzette. Rose was previously married to WLS-TV news anchor Cheryl Burton from 1986 until 1995. He first met Burton while she was a cheerleader for the Chicago Bears in 1985. After their divorce, he married in 2011.

Rose has an estimated net worth of about $1 Million – $5 Million which he has earned through his successful career as a sports broadcaster. 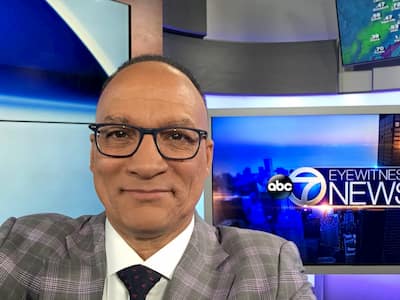 The table below answers some of the frequently asked questions about Rose.

Rose started his career in sports broadcasting while serving in the United States Army, acting as sports director for AFN-TV in Berlin, West Germany (1973-75).

In addition, he is the vice president of the Swan Group, a non-profit group created to give away the “Swan House” to a Chicago area single mother who managed to get the academic distinctions in college. After a period of 4 years of sweat equity, along with an outpouring of community donations, his hard work came to fruition.

Rose handed the keys of a 2,000 square feet house over to a mother who had two children at an average grade of 3.8- approximately in October 2006. In spite of the many honors he has received during his career, he considers this “one of his life’s crowning achievements.” He continues to volunteer his time to help many charitable groups and worthy causes throughout the Chicago land area.

Rose is currently working at ABC7 Chicago where he works alongside other famous ABC7 Chicago anchors and reporters including;

Jim is active on his social media accounts and is often seen posting on his Facebook, and Twitter. He has over 4k followers on Twitter, over 6k followers on and over 2k followers on Facebook.